The market ended lower this week after investors retreated from an uninspired rebound bid throughout the week. The S&P 500 and the Nasdaq Composite both declined 0.3 percent. Small-cap Russell 2000 fell 0.8 percent while the Dow Jones Industrial Average slid 0.9 percent.

Nine of the eleven S&P 500 market sectors ended in the red. The utilities with -1.4 percent, consumer discretionary with -1.5 percent, real estate with -2.0 percent, were noticeable losers; however, the energy with +5.2 percent and communications services posting +0.5 percent were the sectors that ended higher. Energy stocks were substantially higher, followed by the crude oil price, which posted +$4.93, or +6.3 percent gain with the closure of $84.39.

The yield on the Ten-year note was not the problem this week, as it was flat at 1.77 percent. The problem was that the market was still concerned over the Fed's tightening plan and the soaring prices of growth stocks, decreasing technical factors, and the sluggish beginning of the Q4 earnings reporting season.

Federal Reserve Chair Powell, Vice Chair candidate Lael Brainard, and many more central bank officials stated that they favor tightening policies to help keep inflation under control. Powell said in his confirmation hearing that he believes the Fed will stop buying assets in March, increase rates through this year, and let its balance sheets be drained towards the close of the calendar year.

But I'm not convinced. The latest inflation rate is out, and the official figure is 7 percent, which is considerably higher than the 2 percent Fed goal rate. The real-world inflation rate without any government tricks to decrease it is around 15 percent, as stated by economic expert John Williams at Shadowstats.com. And to make matters even more complicated, there is a reason why the Producer Price Index (PPI) has just surpassed record-setting levels year over year, reaching 9.8 percent, which is much higher than the average.

It is clear that the Fed has been in a frantic attempt to control its situation; however if they raise interest rates and shut off the easy money, could it cause a crash in the economy? Keep in mind that there are mind-boggling derivatives and debt that amount to hundreds of trillions of dollars. Many experts predict it would not take much intervention for the central bank to lose out of complete control and melt everything down. 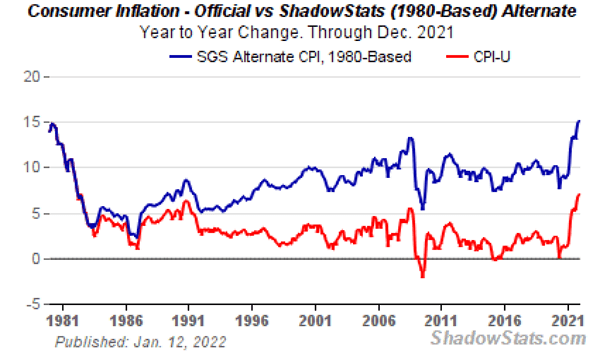 Bond market investors faced a challenge as yields climbed in response to the rise in inflation and the Fed jabbing about the upcoming tightening of monetary policy. Its most widely used U.S. Ten-year U.S. Treasury increased 60 basis points (bps) over the year to end at 1.51 percent. The yield on the Two-year notes that tracks the expectations for the Fed funds increased by 9 basis points, bringing it to 0.96 percent.

The U.S. Dollar accumulated ground, alongside crude oil prices, while precious metals rebounded this week as rising inflation and increasing interest rates come to be the babbling topic. From last Friday's session, gold climbed $17 to close at $1817, and silver increased 50 cents to finish the week at $22.94.

European stock market ended the week small lower. The losses were kept by the consistent performance of the information technology and the energy sector, materials and industrials issues slid towards the opposing side.

The Asia region's market(s) ended lower in the week's final trading. Equities were still struggling with higher-than-expected inflation rates, particularly within the U.S., which has raised the possibility of tighter monetary policies globally and weighed down the growth-related industries like information technology.

The bitcoin market was on edge this week. The price only just managed to hold on to the support of $40,000 (35,300 euro), after which there has not yet been a strong move upwards.

Bitcoin has dipped below $40,000 on Monday for the first time since September 2021. This is a critical, psychological boundary. Luckily the price moved back up, and for now, it held this level.

At the same time, it must also be put into perspective. When bitcoin was first worth $40,000 in early 2021, people talked about Lambo's. And now? Now there is fear in the market.

Stat of the week: Hal Finney is the very first person in the world to tweet about bitcoin. In the legendary tweet, written 13 years ago, Finney wrote: ''Running bitcoin''. Despite his passing, his Twitter account is still online, and thirteen years later, the network is stronger than ever.

In other words, most altcoins only floated partway up with bitcoin, but they will sink at a similar rate (or worse) as bitcoin.

That's what we've seen on Friday. Bitcoin dropped a couple of percent, and the altcoins market behaved the same - except for Dogecoin, of course, because of a tweet from a self-assured Elon Musk.