The market significant indices closed the week that ended 2021 on a relatively positive note, especially for the Dow Jones Industrial Average (+1.1 percent) and the S&P 500 (+0.9 percent). Both were up around 1.0 percent, and both set records in the closing hours and on the intraday this week. The Nasdaq Composite slipped 0.1%, while the small-cap Russell 2000 rose a small 0.2%.

All three major indexes recorded significant gains on an annual basis for the third consecutive year, with the S&P 500 scoring record highs 70 times in 2021. Economic and equity news was not available, and the volume was low.

No specific triggers drove the behavior, suggesting that seasonal events and year-end rebalancing activities were significant. This week included a portion of the Santa Claus rally period from our Mean Sup 4570, defined as the final five weeks of the year and the initial two sessions of the new year.

Except for the communication services sector with a -0.8 percent closing, the other ten sectors of the S&P 500 ended with positive numbers during the week. No sector surpassed the 3.7 percent gain seen in the real estate sector; however, the materials with +2.6 percent, consumer staples with +2.5 percent, and utilities with +2.6 percent sectors were competitive.

Asia market ended mixed to close the year. Europe was a bit lower in a brief session, with several markets in both regions being closed to celebrate the New Year holiday.

Looking ahead to next week

The U.S. economic calendar will begin the new year with full force, providing crucial data on December's activities in the services and manufacturing sectors with separate reports from Markit and the ISM. Also, the December monetary policy session minutes will provide us with the specifics of the Fed's decision to speed up the tapering of its asset purchases.

Other reports that may move the market include The November employment openings, the Labor Turnover Survey (JOLTS). Initial unemployment claims for the week ending January 1, November trade balance, and factory orders.

But the most crucial report is on the end-of-the-week release of the nonfarm payroll report for December. And, with the pace of tightening the monetary policy being the primary issue to the market in 2022, some late-week Fedspeak may also come under attention.

The following week's global economic calendar will begin the new year with crucial December manufacturing and services sector output figures, including the release of the Eurozone, and the U.K, Australia, India,  China, Japan.

However, several things could boost the price of gold (Siver also) in 2022. It is important to remember that never before in the history of humankind have we seen such a crisis in the global debt market of this proportions. Never a debt bubble of this magnitude in Europe and across North and South America, Asia, Africa, and Oceania has been synchronized to the level we're currently experiencing.

Therefore, owning physical gold and silver is similar to placing your money on a roulette table with just black numbers. You are sure to succeed every time. The past has proven with absolute certainty that government will continually ruin the economy and the currency - It is wealth preservation. 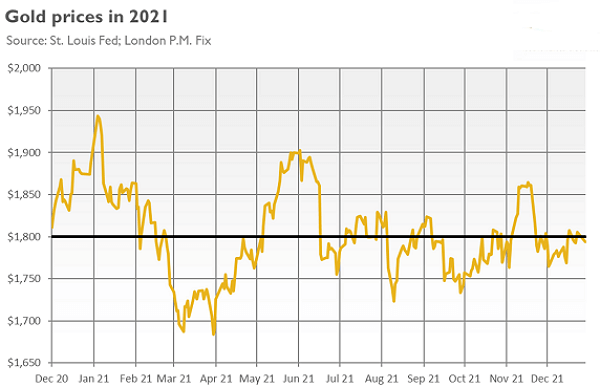 Cryptocurrencies in a snap

Significant cryptocurrency losses have widened in the last week. BTC's price dropped below $47,000 in December. 31, when it to be seen hovering just below that mark according to data from TradingView and Cointelegraph Markets Pro.

Other altcoins had a similar downward trend as Bitcoin and Ether: Solana's SOL and Binance Coin (BNB) dropped over 2 percent. Cardano's ADA plunged by more than 4 percent on the final day.

According to CoinGecko, the total market capitalization of all cryptocurrencies has dropped by more than $100 billion since its peak in the intraday period. It fell from a record high at $2.4 trillion to $2.27 trillion. 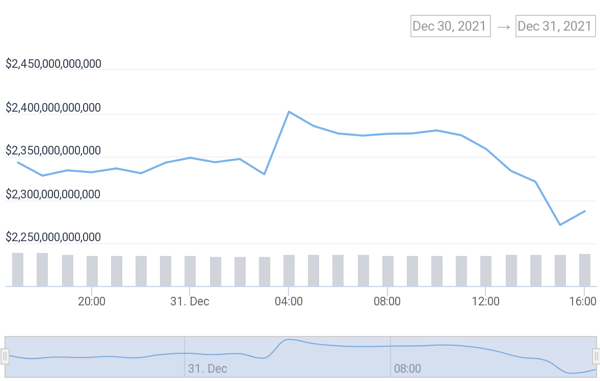 Happy and prosperous New Year to our Dear Readers from all of us here at Trade Selecter.