U.S. stock market dropped by the most significant margin in nearly three months, moving about away from high-flying technology stocks gained steam, with traders and investors challenging the sustainability of high valuations. For the week, the S&P 500 index declined 2.3%, the Nasdaq Composite tumbled 3.3%, the DJI Average dropped 1.8%, and the small-cap Russell 2000 index fell 2.7%.

With the top-weighted information technology sector dropping -4.2%, it was and still is this year's most immeasurable performing sector, despite this week's deadbeats Microsoft with a 6.4% decline. The energy sector posted -4.5%, which declined the most, as the utilities sector managed +0.4% gain and the materials sector with +0.8% were spared sectors. 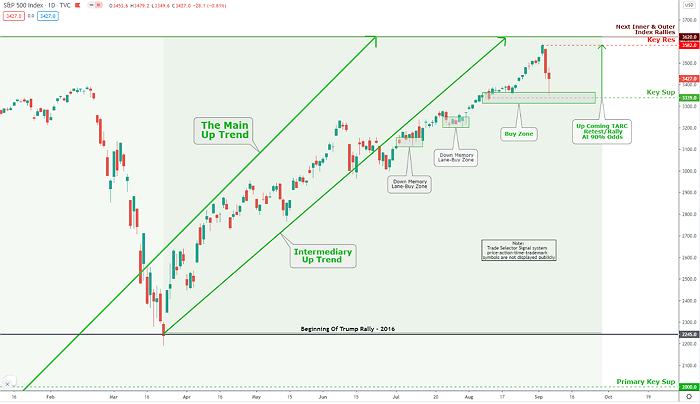 Technical Analysis and Outlook: The S&P 500 market is proceeding to a Key Res $3,582 and fully developed TARC formation - Not shown. Next Spooz continuation, is the next Inner and Outer Index Rallies marked at $3,620. The Key Sup area marked at $3,339 is an excellent buying opportunity.

Why the market rout NOW?

With the market action between the first of March and the first of June, the Fed added $3 Trillion to Wall Street's monopoly money. Springing off this trampoline of fiat money, equities prices rebounded and moved higher than ever before.

This was notwithstanding falling GDP (Gross Domestic Product) growth and declining earnings and share growth. That is to say; there was no justification for it – except the flush of the Federal Reserve’s brand-new money.

Just then, beginning in June, the Federal Reserve slackened its purchase. Its balance sheet – which marks the amount of money it feeds to Wall Street gang – went down drastically.

And if the selloff on Wall Street continues, the central bank will respond as it has for the last three decades – it will boost the ration, putting more cash into the pot, swelling the market averages once again.

However, there’s a whole more crazed story about the equity market, as well. The indices averages are profoundly weighted towards the dominant stocks – BTW, those that make the news headlines and bring the “Robinhood” traders' attention.

For example, the top four stocks – Microsoft, Google, Apple, and Amazon – are presently worth more than every (except the U.S. and China) country. Apple Inc. is worth more than the whole small-cap Russell 2000 index. However, the majority of stocks are still depressed for the year.

After the week, the reassuring Unemployment numbers for August added to the relative outperformance of value and cyclical equities and some curve-steepening action. The Russell 1000 Value Index faded 0.3% contra a 3.4% slump in the Russell 1000 Growth index.

On the curve-steepening activity note on Friday session undid the curve-flattening motion from early on in the week. The Two-year yield rose one bps to close at 0.16%, while the Ten-year yield dipped one bps to print a 0.72%. The U.S. Dollar Index was promoted by 0.5% to finish at 92.97.

The Chicago Board Options Exchange (CBOE) Volatility Index spiked by 33.9% to close at 30.75, as investors and traders felt some safeguard against further vulnerability in stocks. For whatever it is worth, the S&P 500 index concluded the week at levels it last seen traded on August 21.

In Eurozone markets, stocks canceled gains and concluded more than 1% on the downside. France's stock market bettered after the news of a €100 Billion stimulus plan.

The development of Japan's market was the best-performing for the week. Traders and investor sentiment for the country experienced a boost when Berkshire Hathaway Inc. made significant investments in numerous sizeable Japanese trading companies.

Although Japan’s Purchasing Managers' Index (PMI) remains in the contractionary zone, the jobless rate was summarized better for July than anticipated. Industrial production in the same month climbed at the fastest pace in history.