The market delivered a lot of excellent news this week, though it had to strive laboriously hard for step-by-step new highs in the S&P 500 index and Nasdaq Composite, which was a tad frustrating for bulls. The S&P 500 index ended flat, while the Nasdaq Composite finished with -0.4%, DJI Average lost -0.5%, and small-cap Russell 2000 with the posting of -0.2% closed moderately lower.

Briefly underscoring some of the substantial slate of positive-sounding market developments:

The energy sector finished +3.6%, the financials sector posted +2.4%, and the communication services sector print of +2.9% were the sectors completed the week firmly higher. In comparison, the information technology sector with -2.1% and the health care sector of -1.9% were the sectors that fell 2%. 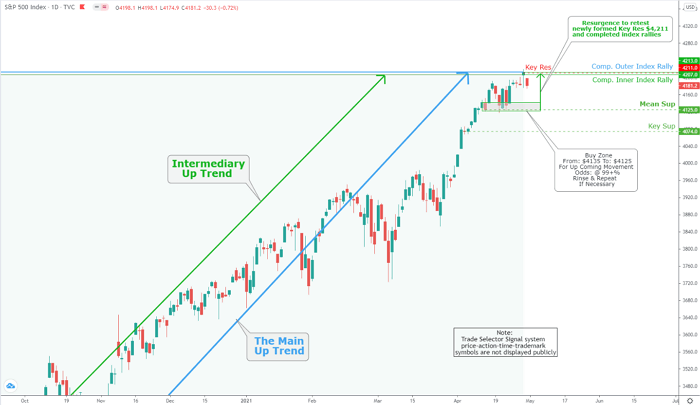 So, what has happened? In the two weeks since, the S&P 500 index gained a respectable 1.4%, which implied that much of the earnings announcements were priced in during the pre-earnings run - hence gunning the market to our Outer and Inner projections.

Therefore, the market says that the stocks found it the intermediate top and will retrace to Mean Sup $4,125 to provide ample opportunity to load the boat for resurgence to retest newly formed Key Res $4,211 and completed index rallies.

In the U.S. Treasury bond market, treasuries displayed a lack of trading direction before ending slightly higher. Consequently, the yield on the benchmark Ten-Year yield, which flows opposite its price, rose six basis points to close at 1.63%.

Eurozone markets were mixed, as the old continent authoritatively re-entered economic recession, although confidence ratios in key countries climbed. Spain was solid on expectations for a return of tourism after the EU (European Union) announced it would be reopening this summer to vaccinated American visitors.

Germany’s vital DAX Index declined after reports that the country’s current draconian lockdown may be prolonged until the end of May, and confidence-taking measures fell.

Asian-Pacific markets all declined at week’s end to answer much weaker than anticipated purchasing managers’ indices in mainland China and a widening antitrust cracking down on China’s giant technology companies.

Gold and Silver market was little changed on the week, with Gold closing at $1769, down $8 from previous Friday’s closing price, while Silver was at $25.89, down 10 cents for the same period. The closing trade date for Gold and Silver on the Comex May futures contract was on Wednesday, with the white metal contract being “active.”

However, there were few wonderments in Friday’s Commitment of Traders’ announcement, other possibilities than the Non-Reportable category, which by the way went opposed the market grain added 4,863 additional contracts to a net long position of 31,695 the last week to a new total of 36,558. Both hedge funds managed monies, and other related reports cut their long positions by 10,879 contracts between them.

What a week again in the crypto world! Ethereum is breaking record after record, XRP is taking a sprint, and Litecoin was also looking good. Meanwhile, Bitcoin is taking off too. Can we expect more this weekend? We shall see.

Notable info is that Bitcoin options expired on Friday; what does that mean? That was an important trading day, as $3.6 billion (€2.9 billion) in Bitcoin options contracts expired. Until now, the expiration of such contracts has been the trigger for a new all-time high.

Does history repeat itself? Past results offer no guarantees for future performances; however, May is historically an excellent month. Over the past ten years, the price of Bitcoin has risen an average of 36%. Only in 2015 and 2018 May proved to be a downer.