The stock market closed little changed and mixed this week identified by consolidation price action and by the White House proposal to raise capital gains tax discussions which added to the pressure on the market. The S&P 500 with -0.1%, DJI Average with -0.5%, and Nasdaq Composite postings of -0.3% ended slightly lower, while the small-cap Russell 2000 marked +0.4% gain and closed marginally higher.

Beginning with some perspective, the broad S&P 500 index was up 7.0% over the previous four weeks' activity, with approximately 95% of its elements trading above their price aggregates. Sentiment had gone very bullish, too, providing credence to the overview that the market was slated for normal sideways price action and a pullback to our buy zone.

Indeed the market took the pullback route, seemingly hypersensitive to selling interest. So, there was one particular day of the notable selling frenzy and for our rinse and repeat the message, though, and that day was on the Thursday trading session.

However, in the face of the comeback effort, the S&P 500 energy sector with -1.8%, the consumer discretionary sector with -1.2%, and the utilities sector with -1.0% still settled lower by at least 1.0%. The two sectors: health care with a posting of +1.8% and real estate sector print of +2.0%, were the definite winners.

Many companies' earnings reports proceeded to beat street expectations in other significant developments; by and large, job weekly initial claims declined to a new post-pandemic low base at 547,000, and recent home sales mounted to their highest annual rate since August 2006 of 1.021 million.

The US Treasury Ten-year note yield was stable, closing at 1.57% in a very tight-ranged trading week's session.

Most Asian and European market(s) were weaker. The ECB (European Central Bank) held its interest rates unchanged and increased substantially at a much faster pace of bond repurchases, as it had declared earlier.

European Central Bank President Christine Lagarde warned, however, that the near future outlook was still unknown. The sentiment was set back even further once the US State Department bestowed its “Do Not Travel” guidance to approximately 80% of countries, including most Eurozone.

Japan's stock market was among the most vulnerable of all the major Asian equity markets, as the Japanese government planned yet another state of emergency that could shift the country's return into recession.

The gold and silver market extended its rally in lackluster trading this week. Silver has now recovered the losses since the beginning of the year, while yellow metal is 6% underwater. In Friday's trading, gold closed at $1,777, down $1 from the previous Friday’s close, and silver metal closed at $25.99, up 5 cents on the same time frame trading session.

Thus far, the silver has outperformed gold from its lows at the start of April, pushing the gold/silver ratio downwards slightly somewhat to 68.5.

Bitcoin on sale, but why?

The crypto market can change in just a blink of an eye. Last week Bitcoin was priced over $65,000; however, as of this writing, it had already decreased more than $15,000.

Thus, as a famous saying goes: ''Buy when there's blood in the streets''. Aggressive (Higher risk) buy could be done at completed Outer Dip $47,830, or it could well be a more prudent opportunity to buy at Key Sup $44,840.

So, has Bitcoin bottomed out? Or could it drop even further? Keep an eye out for the Bitcoin to find out! The decision is yours. We can only advise you on one thing: have a nice weekend and enjoy the show! 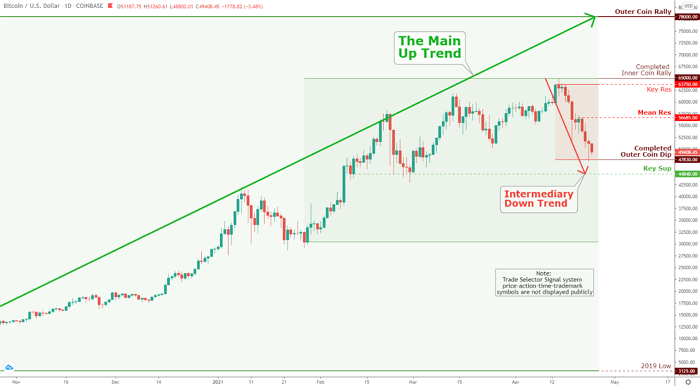