All of the market large-cap indices surged more than 1.0% this week with a heavy load of the news. The S&P 500 with +1.4%, DJI Average with +1.2%, and Nasdaq 100 with +1.4% tapping new all-time highs. The small-cap Russell 2000 index increased 0.9%, while the Nasdaq Composite increased 1.1%. The market (especially in the S&P 500) clearly showed no giving up and valued the bullish trend despite cries for a pullback and consolidation.

The Outer Index Rally of $4,122 was hit on April 13. The next target for Inner and Outer Rallies is the $4,207 mark. Aggressive buying can be executed on a pullback at $4,140 - $4,125 (If a pullback and consolidation will happen) with Rince and Repeat action as otherwise specified. The significant support level stands at $4,125. 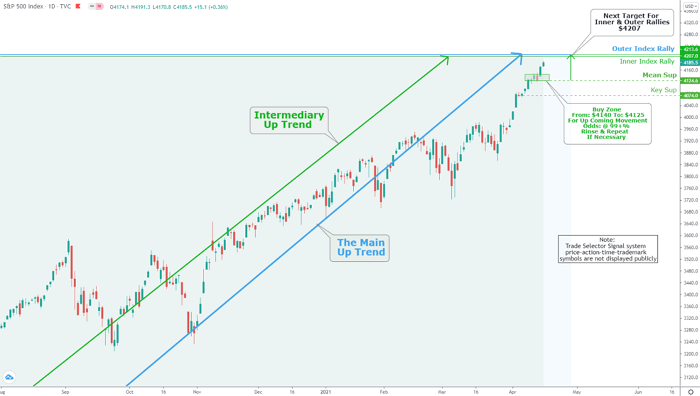 Gains were recorded across all ten of the eleven S&P 500 sectors, especially about the utilities sector posting +3.7%, the materials sector print +3.2%, and the health care sector with +2.9% were the biggest gainers. However, the communication services sector posted -0.01% was the lonesome holdout amid mellowness in its prime-weighted components.

In brief, here are highlights of the most important events: the big to fail banks published better-than-expected first-quarter earnings and announced positive critique, core Consumer Price Index (CPI) for March was benumbed on a year-over-year base with 1.6%, retail sales climbed 9.8% m/m in March, and Coinbase (COIN) becoming a public company on Wednesday with a book reference price of $250 per share.

Many misrepresentations were surrounding these events; however, the takeaway for the bullish market was that the good news was good, and the not-so-good news was not bad enough to detract from the good news. For instance, Coinbase struggled after its open, signalizing buyer weariness, but ARK Investment Management LLC's Cathie Woods picked up all the shares.

In the backdrop scene, the Fed did what the Fed has done best: letting the market understand that it will continue its monetary policy accommodative, even as the U.S. labor market and economy resume its rebound. Fed Chair Jerome Powell added that once solid progress on its inflation and employment goals has been attained, it will begin to lessen the asset purchases well before it hikes interest rates.

We can recall many examples of Fed talking heads speaking out of both sides of their mouths (as events demanded) are as bothersome as they are comical. Here are just some examples:

With the facts mentioned above in front of you, are you still trying to trust the Fed? Do you furthermore think that their score of 0 in 10 or accurately forecasting and evading recessions is grounds for conviction?

Do you furthermore think the Fed is protecting us as risk assets are rising to everything bubble levels never observed before in the entire history of capital markets? Similarly, do you believe these private banksters who pretend to be public servants in a public office are serving the ever-debasing almighty dollar in your pocket? Think again.

The market had one unexpected thing this week, that long-term interest rates have accelerated their monthly downtrend notwithstanding solid economic numbers. The Ten-year yield decreased ten basis points to close at 1.57%, including an 11-basis points decline in one day, in a movement fed by short-covering trading activity.

The gold and silver market had an exceptional trading session on Friday, breaking out of their current trading ranges on firm buying. This was shown in significant developments in Comex open interest (OI) for both precious metals.

The Eurozone market was higher and, collectively with the muscle in US stocks, promoted the MSCI All-Country World Index to a new record high. Eurozone retail sales in February were recorded to have risen much more than expected. Nevertheless, economic numbers from the region were messier than that in North America.

In the rising of the sun (Japan), equities declined after surprisingly low February machine orders. Also, statements from the ruling LDP party officials proposed that the Olympics could be canceled or move on without any fans.