The stock market trend trend was mixed on Friday, as it chilled off from two-day robust rallies amid an obscure response to the August non- farm employment report.

DJI Average with +0.3% and The S&P 500 +0.1% closed slightly above their neutral price marking, while the Nasdaq Composite with minus 0.2% and small-cap Russell 2000 minus 0.4% indices closed marginally lower.

From a headline news perspective, the employment report appeared to disappoint investors and traders as jobs growth came in way below expectations.

Friday's action did not reflect much energy, though, but that was not out of the ordinary after brisk two-day rallies in stocks. Session's market leaders were materials, energy, and consumer staples all posting +5%.

What it all means for the market trend

I have addressed the subject for a long time about changing the shape of the Treasury yield curve. That yield curve has inverted and flattened in a movement that has called out the market's attention because that movement has often been associated as a caution sign of a recession sneaking on the horizon.

I have also noted that past yield inversions never happened in a market scene quite like this one, where more than $16T (trillion) of global debt holds a negative yield. The meaning is that the unflattering state of the curve could be the byproduct of a worldwide race for return more so than an appearance of real recession concern.

Economic growth is stalling, and that involves job growth as the August Job Report indicated. However, that Job Report was still punctuated with statistically notable job growth and strengthening aggregate earnings growth.

Glancing in the rearview mirror at the August Job Report, I would contest that a good forecast for consumer spending rests more robust than it arises in the pattern of the yield curve. So, Even with the big boost in the stock market trend past week, there are, however, a lot of warning signs.

After ten years of the financial disaster, there is absolutely zero indication that stock markets can produce or support new highs without synthetic market intervention or inducement of some sort. A colossal subsidy program thus far has not presented the above-market trend increase but shows wealth inequality and debt augmentation. 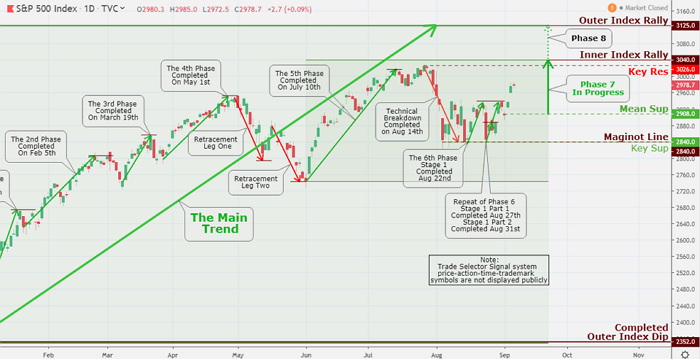 The S&P 500 index is now less than 2.5% away from closing in on their all-time high of $3028, and heading for completion of Inner Index Rally $3040 - projected by Trade Selector Signal on July 3. (See SPX 500 Index, Daily Chart Analysis July 3), with the only significant resistance occupying at Key Res $3026. The downside risk is marked at Mean Sup $2908

On the other hand, weaker U.S. Dollar contributed to the British Pound upward movement. The U.S. Dollar ended the week lower across the board, especially against EM's (Emerging Market) currencies amid an increase in risk management sentiment.

The Sterling now is having upside momentum on the daily chart as the GBP/USD pair remains slightly below the completed Outer Currency Rally line. Initial resistance awaits at later part of July's generated Mean Res $1.2482. It is followed by Key Res $1.2568.

On the downside, initial support which capped the pair on September 5 is Mean Sup $1.2167. Further down, we have Key Sup, completed Outer Currency Dip and Maginot Line, which held the currency down in mid-August. 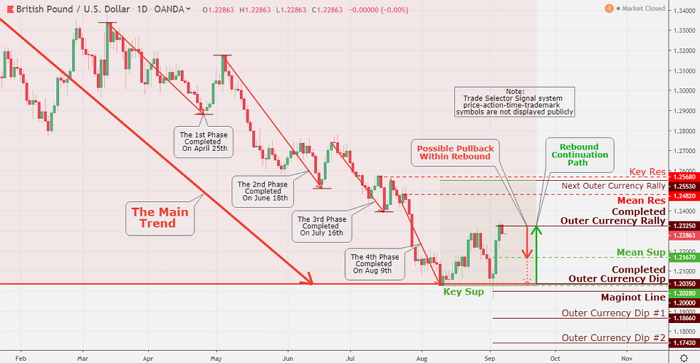 The British Pound Market (Click the Image to Enlarge)

The cryptocurrencies had a moderately quiet and mostly bearish trading session on Friday with the significant cryptos losing ground in early hours of trading but bouncing up following the American trading session.

Bitcoin has been drifting sideways at the post time, and the main currency continues to exhibit strength, by holding on to most of its gains in the face of the moderate bearish market segment versus vast pressures of Friday's abrupt sell-off among the established safe-haven assets such as the Japanese Yen, Gold and United States Treasuries.

While some top cryptos are all trading above their recent lows - There is still no convincing technical evidence of the substantial reversal to the upside market trend move, with the odds continue to favor possible another crypto segment downswing.

However, the leading coin continues to hold on to its short to medium-term buy signal in our market trend model thanks to its solidity and bullish transformation in investors sentiment - which IMO could be a very positive mark for the whole cryptocurrency market segment.

The leading coin continuously is displaying a much more positive technical setup then the rest of top coins and there is a strong possibility that the digital currency is setting its self up for an additional retest of the Mean Res $10,900 in the coming days. 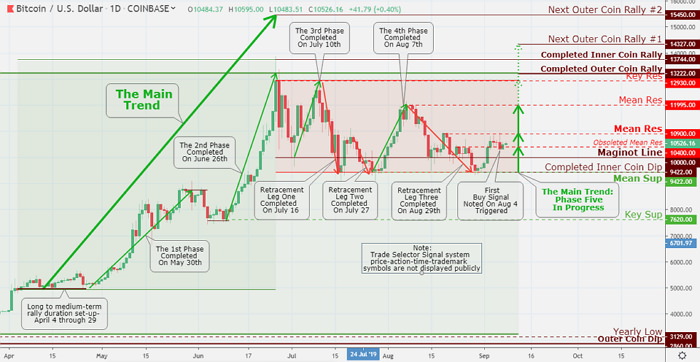