The market trend last week was abundant with unusual developments, though, movement in the stock market was limited. In many references was due to Friday's quarterly quadruple witching (stocks and futures) options expiration.

Trading volume was considerably above average, with more than two and half billion shares changed hands at the New York Stock Exchange trading floor, and that was the difference-maker for the many bulls and bears at least in a indices market trend.

DJI Average underperformed, by declining 1%, the broader S&P 500 index was down 0.5%, while the Nasdaq Composite surrendered 0.7%. The small-cap Russell 2000 index finished down with 1.2% for the week.

The crude oil was in the center of trading at the beginning of the week, after Saudi Arabia, two refineries were struck on September 14. Initial statements hinted that the attack impacted about 5% of total global crude oil production.

Though Saudi Arabia was able to reestablish a portion of the disabled production in short order, the crude oil mounted more than 15% at the September 15 open, partially due to a concern that a response to the assault could ignite a major regional conflict.

However, those worries subsided as the trading week went on while crude oil backed off its Sunday, September 15 high, finishing with an increase of $3.21 or 5.9% for the week.

Then on Tuesday, attention turned to the overnight funding market after the repo by Fed rate vaulted for the second continuous trading day, symbolizing liquidity stress amongst primary dealers. The circumstances urged N.Y. Fed to administer repo action on Tuesday thru Friday.

The Federal Reserve dot plot revealed that seven out of seventeen Fed directors demanded that another interest rate cut should be made this year, however, the median forecast does not aim to any more additional interest rate cuts in 2019 and 2020.

Bottom line, presently there is a possibility that this might be the very last interest rate cut of 2019 as the medium-course adjustment process lasts though could be concluded.

Hence call this a hawkish interest rate cut. The market was, of course, very much disappointed with the limit on the volume of candy they will get still more interest rate cuts find an ever much slowing economy and that is not something to cheer about.

Nevertheless, there was some small movement on the trade front by the conclusion of the trading week, as Trump's administration allowed short term tariff exclusions for some imported Chinese goods.

The ruling was made following trade officials from the United States, and China carried out low-level discussions leading to the next round of tariff negotiations scheduled for next month; however, the positive vibes were very short-lived.

The Chinese team canceled their U.S. visit abruptly. The negotiations group had initially planned to tour the farms in both  Nebraska and Montana as an act of good faith.

Presently it is unknown whether China will buy more U.S. agriculture products as initially declared. The Chinese negotiation delegation has yet to explain their reasoning behind the sudden termination of their tour.

For some of you not familiar with market trend term "Climbing wall of worry," - what this phrase really means is rest assured we are finding out in the current year. The broader S&P 500 index is up 20% for YTD (Year-To-Date) and is lying on the doorstep of a historical all-time high.

It has been a glorious year thus far, which if one thinks about is truly extraordinary considering that this 2019 year it has been a year packed with a litany of not very good developments.

We are essentially three-fourths of the way in 2019 market action, and we do not have to use fractions to estimate for market sector winners. The mathematics is elementary. There are eleven market sectors, and all are 100% up for the current year.

However, this is not a time to go with speculative fever. The climbing up the wall of worry has given the market trend a full valuation; furthermore, an increase in volatility in 2019 reflects changing attitudes that suggest a feeling the EM (Easy Money) has been created in this historic bull market trend.

There might yet be a few levels to ascend; still, one would be strongly advised to hold on firmly both sides of the ladder while climbing, adopting the stocks of the vest of very profitable companies, have very good cash flow pattern, stable balance sheets, and pay a good and steady dividend.

It knows that this ten-year-old bull market trend is ascending an extension ladder with many difficulties occurring in its locking mechanisms. If those tools eventually fail, the fall will be fast and inevitably more painful for the portfolios that are not well diversified and which have preferred story stocks, as opposed to high-quality stocks, while scaling the wall of worry.

Chart of the week 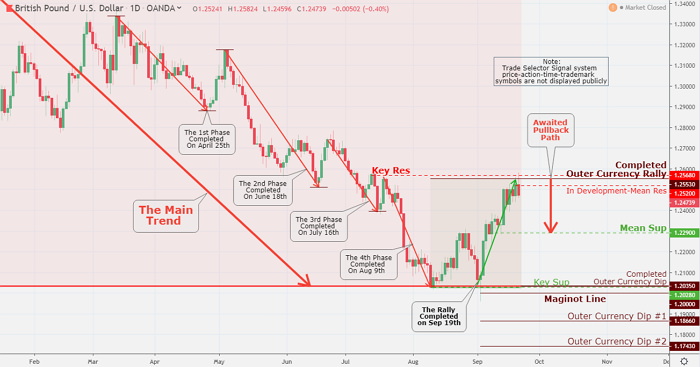 On Friday, the GBP/USD moved to a new two months high but stalled at the Key Res $1.2568, following completion on Thursday of Outer Currency Rally $1.2553.

The failure to move higher is a sign that means more than hitting both outcomes - Bearish mode. If the price stays at and below the present Mean Res $1.2520 (In development) - Then the current market trend move is over, and the bears will be in control.

Thus we are heading into the next week trading, with a perhaps very bearish bias expecting initial prices to drop to Mean Sup $1.2290.