Overall trading action was softened for most of the session; however, the price moves within the markets were much more apparent. For example, after spiking nearly 15% on Monday, West Texas Intermediate oil pulled back $3,09 or 5.0% after Saudi Arabia announced its plans on restoring full crude oil production by the end of this month.

One of its most significant one-day gains ever in crude oil on Monday session was definitely one of the most shocking moves in thirty years, and depending on ones point view surely qualifies, at more than five standard market trend deviations outside the norm.

By the way, when this occurred in December last year, it shifted the trajectory of the markets, even though there were a full of other major factors adding to that event.

So, for now, it remains to be seen if it is this pullback will be enough to draw in some buyers into the retail and transportation shares which underperformed on Monday trading session as oil prices skyrocketed.

For energy equities, it tended to be a healthy sign for advancing. Contrary to what numerous people may believe, it was additionally an excellent sign for stock indexes such as the Nasdaq Composite index, which was moving each time positively six months later.

Chart of the day 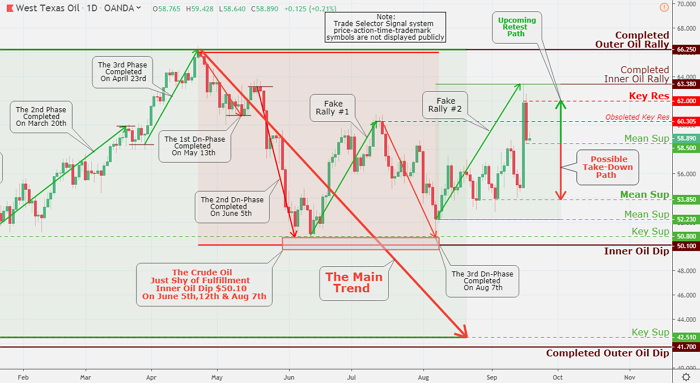 For crude oil, it remains to be seen if it is this pullback will be enough to draw in some buyers to retest major Key Res $62.0. With its completed Inner Oil Rally $63.38 the down move might take the crude oil to long-time standing Mean Sup $53.85.

Market trend and the repo volatility

Market trend experienced shock as the New York Federal Reserve concluded overnight repurchase (Repo) operation for up to $75 billion worth of assets.

For those declaring “Technical Factors” in the repo; everyone and their brother remembers about the middle of September calendar bottleneck. Are these happening every September ring any bells about Lehman Brothers?.

The only question one should be asking is: exactly why this particular one? What is different this time around?

Oh yes, for those wondering why the New York Fed did a repo, the explanation is very simple - Do you honestly think that a central bank that is bound to carry out a $75 billion monetary liquidity injection the day before its crucial monetary policy decision is going risk a negative market trend response by not lowering interest rates?

Well, a repo here a repo there and before we know it we are encompassing full Quantitative Easing (QE) - Act surprised!.