The stock market trend stretched its winning streak to three weeks, with value-oriented market sectors driving the market trend closer to all-time high levels. The S&P 500 index climbed back above 3,000 for the first time since the 25th of July.

DJI Average logged eighth straight increase with +1.6% and surged back above 27,000 not seen since 11th of the July. The Nasdaq Composite index with +0.9% performed well, also.

The small-cap Russell 2000 index had the best trading week since late of 2016, posting 4.9% gain, while its sister S&P MidCap 400 index grew 2.7%. The trade-sensitive average Philadelphia Semiconductor Index improved by 2.4%.

The British Pound was the big story in the Forex market. The Sterling is tearing higher (act surprised), above $1.25, the highest price levels since late of July 2019.

Bears took charge of the crypto segment on Friday, though trading persisted relatively calm as the major coins all failed to develop bullish momentum.

Bitcoin could not capitalize on Friday's modest gains, as the majority of the top altcoins are remaining under selling pressure. Bitcoin's primary overhead resistance level ironically is obsoleted Mean Res $10,400 limiting the coin in every rally attempt.

On Thursday (September 12), super Mario Draghi, in his swan tune as the serving President of of the ECB cut interest rates and added more QE stimulus. That action propelled the Gold market flying, driving the metal upward nearly $30 before session settling almost $5 higher.

The fear and panic factor of Yellow metal falling have subsided for now as the $1,500 level December future contract held. The Gold rally was part of a short-covering and likewise part of the ECB ignorance actions. Coming up is the Federal Reserve meeting and what will they do with interest rates.

Never the less Gold and Silver it is not only in bullish market trend sentiment for the risk-on asset class which was lowered on Friday, but it was likewise one of the market forces which ended the week in much lower pricing in the precious metals market.

The market trend in September

The market trend in September has some pretty scary history for the equity market - is halfway completed. To this point in time, the month of September has only been intimidating for short-sellers.

At this point every market trend sector is up; Energy +6.2%, Financials +5.9%, Industrials +4.9% are among the market leaders, however, except for the Real Estate market sector which is down 0.8%. Many market sectors are up big time, something like four to six percent bigger.

The broader S&P 500 index is in an extraordinary spot midway through September. It's lying less than 1% away from its very all-time high price. That is unusual given the trade war ambiguity, the absence of earnings growth, as well as an unfolding recession possibility in the manufacturing sector.

The market resilience almost defies logic, never the less the market's rationalization or reasoning is that low-interest rates, and a shared need to enter a trade agreement, will be the link to a much more hopeful future for economic as well as earnings growth.

The S&P 500 index is at a relevant inflation period, which by the way is always the case when it's in a mode of testing a prior high. It's only fitting, and then, we will hear from the Federal Open Market Committee (once again) as well as that the United States and China are commencing face-to-face tariff trade meetings (once again).

The market trend has discovered a basis to be enthusiastic about each event; however, there are yet risks in every case for a rope-a-dope movement on a stock market that has come out hitting furiously in the month of September.

The major rally in the equity market in the face of growing interest rates might be counter-intuitive because equities typically do very well when interest rates are decreasing. In this case, though, the much showing is that belief and intuition where rising interest rates imply good things for the country economy - or at least much less bad things feared previously. 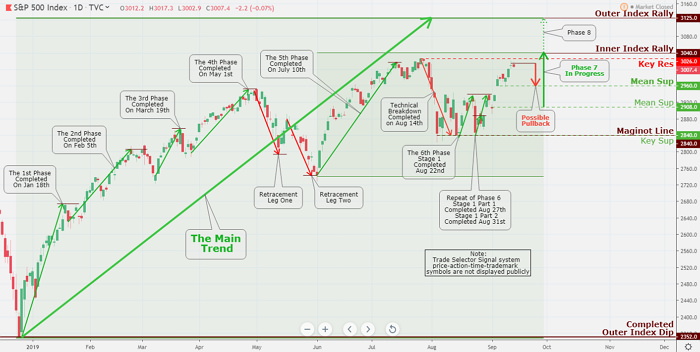 S&P 500 lying less than 1% away from its very all-time high of $3,028, and heading for completion of Inner Index Rally $3,040 - Bulls have a solid overall short to near-term technical advantage and have a grip on an uptrend.

The relatively weak Key Res $3,026 is a moderate barrier to progression, while pullback to Mean Sup marked at $2,960 might be in the cards.