U. S. stock market then cut its losses after Federal Reserve Chairman Powell announced the central bank's plans on increasing its balance sheet; however, it quickly evaporated into the closing hours on reports that the Trump administration will impose visa limitations on Chinese officials connected to the human rights abuses.

Overall eleven S&P 500 index sectors concluded lower on the session in a risk-off trading day. Nine index sectors lost at the very least 1.0%, including a 2.0% decline in the financial index sector. The real estate posted a minus 0.5% decline.

U.S. Treasuries market closed a very volatile trading session on a higher mark amid economic growth anxieties as well as an unexpected slump in producer prices for last month.

Looking at the forwarding market, traders and investors will host the Minutes from the FOMC's last monthly meeting, the JOLTS (Job Openings and Labor Turnover Survey) report for August, the weekly Mortgage Banker Association - Mortgage Applications Survey today, as well as the Wholesale Inventories report for the month of August. 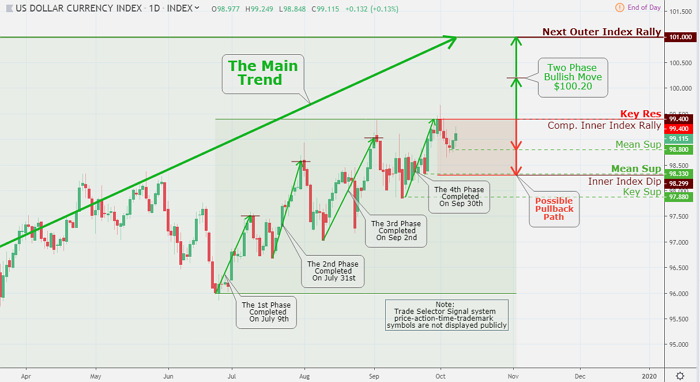 Currently, the DXY is experiencing steady to low retracement as possible touch down at Mean Sup $98.33; however, minor support might be experienced at weak Mean Sup $98.80.