On the heels of the fascinating wild market action in the past few days, we are witnessing significant upside move in the Gold - Silver also surged.

Gold futures contract rallied above $1,500 an ounce on continued enthusiasm for the traditional safe-haven. The Yellow metal advanced as much as 1.2% to $1,502.30 on the Comex Exchange, the highest level as of 2013.

The precious metal is doing quite well not just in U.S. Dollar terms but in most other foreign currencies. In Canadian Dollars, Australian Dollars, British Sterling, and Indian Rupees,  it's now priced at all-time high levels.

The Gold market movement stretches this year's rise to 17%, with gains underpinned by inrush into ETF's (Exchange Traded Funds). Here is a glance at the chart of the day.

TSS symmetry move is proceeding along beautifully. Take a look at that completed Outer Gold Rally $1,468 and upcoming Inner and Outer Gold Rallies $1,508 and $1,510 respectively.

We are now well into our rallies zone, and we are also on trial with completing our long-standing symmetry move towards next Outer Gold Rally $1,590.

We recognized that technical breakdown configuration which occurred following the third phase and then locating Key Sup at $1,415 was a bullish pullback and therefore also a tremendous opportunity to 'load the boat' - Buy, and buy.

All of this price action with no aid from a much weaker U.S. Dollar, which by the way designates to print further increases when the final U.S. Dollar weakness sets in. Expect significant upside movements in the Gold and Silver markets to continue. Got Gold - Got Silver?

Following the big market sell-off observed on Monday (August 5), majority stocks exhibited a convincing move back to the upside throughout the trading session on Tuesday (August 6). The leading indices fluctuated after an early higher surge nevertheless kept a positive bias during the trading session.

Part of the logistical reason for this failure was how complacently bullish investors and traders were positioned into the Federal Reserve. We call this the unfalsifiable confidence in the Federal Reserve. For a decade that has worked well, yet we also want to acknowledge when that no longer fits, and interest rate cuts and easy money no longer serve well.

When the primary trend is in place, and the market is progressing in the path of the trend, is known to be spontaneous. However, if it is moving in opposition to the trend, then the movement is understood as a corrective one.

Social, financial, and political swings have a definite structure. The markets seem to fear currency wars. Well, at least that's how MSM (Mainstream Media) sees things. Actually, currency wars have been running on for many decades disguised in many other forms.

Correctly interpreted, currency wars have been running nonstop for many decades, So, the burning question is: Why would a nation proceed with a currency war when its government authority understands it will disproportionately harm its citizenry: the savers, real salaries, poor, as well as path to goods and services? Because the purpose is not the growth or welfare system, but power and control.

In reality, it is not about currency war what so ever - there are global bond yields which are at stake. The bond market knows the distinction. 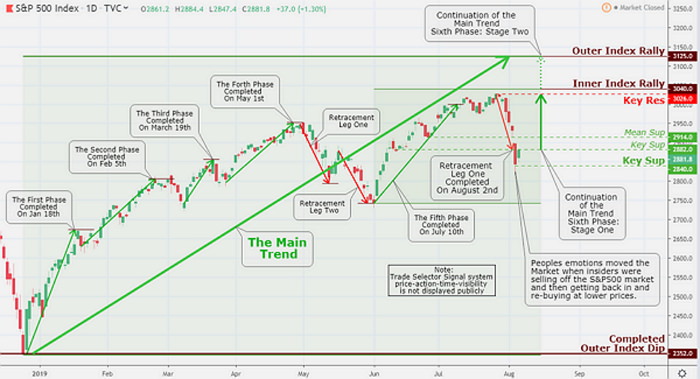 S&P500 closed lower on August 5, and by doing so, obsoleted the both Mean Sup 2914 and Key Sup 2882. The following day we observed remarkable rebound. The higher-range closure sets the stage for a steady to higher advancement towards the designated Sixth Path Stage One, while new Key Sup 2840 resting below.