U.S. stock market climbed sharply higher in the early morning session yesterday (August 13) and continued to stay firmly in positive territory for the remainder of the day. With the jolt on the day, the significant indices offset the very steep losses suffered on Monday's session.

Asia-Pacific stocks ended lower on the session, with the worldwide markets staying to be hindered by United States-China trade uncertainty, the geopolitical dilemma in Eurozone, global growth matters and the escalating color revolution in Hong Kong.

In the bond market, U.S. Treasuries pulled back after driving sharply higher throughout Monday's trading session. Subsequently, the yield on the Ten-year note, which by the way flows counter of its price, rose 4.1 bp to close 1.680%.

In the precious metal market, investors and traders sold Gold on the news story that certain consumer items were being excluded from the new tariff list imposed by President Trump, while some duties would be postponed until December 15.

However, tariffs are not the main reason. Gold and Silver has been climbing. It is the Federal Reserve and other world central banks slashing interest rates and preparing for more Quantitative Easing.

So, the confidence and faith we had in central banks in 2009 have been destroyed and obliterated. The belief in central banks, ECB (European Central Bank), BoE (Bank of England), BoJ (Bank of Japan) and the Federal Reserve is virtually entirely gone. If you need evidence, look at the U.S. Dollar price of Gold, look at the price of Gold and Silver in all other fiat currencies around the world that it's priced.

How about this fact: $1 nowadays has the equivalent buying power that $0.16 had in 1971 when President Nixon closed the 'temporary' Gold window. Over this equal period, the United States debt has gone up from approximately $398 Billion to above $21 Trillion (That with the 'T'), and the national economy has been entirely warped - Got Gold, Got Silver.

Chart Of The Day

The Silver is the best performing precious metal this week. The metal racked up 4.78 percent so far. The metal had been somewhat disconnected from Gold’s price moves; however, now with recession probabilities mounting; Silver is grabbing its bid.

There rumors that there is a significant buyer of vast amounts of physical Silver as well as Gold on every dip, and that is perhaps one of the reason what is pushing the resiliency of both precious metals. 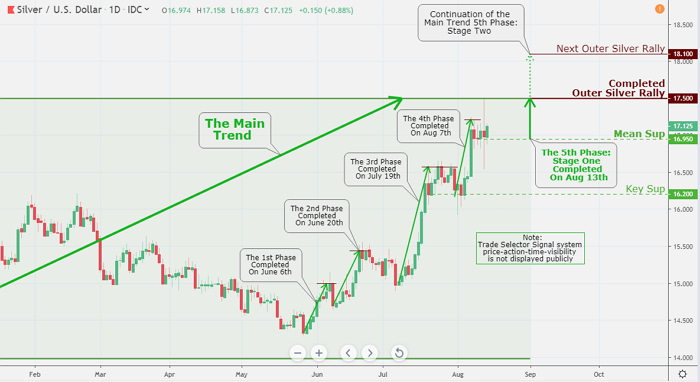