This Commodity Market Commentary covers various topics and understanding of commodity market activity and engaging information for an astute trader and investor, of international markets by demonstrating how interconnected the economies of nations have become.

October 20, 2018: Commodity market was mostly bullish on Friday on account of the US Dollar’s drop, with WTI crude oil recouping after Thursday’s selloff. The crude oil contract rebounded back all the way to the $69.51 price per barrel level, as the energy commodity prevented an essential degradation out of its lengthy down slide pattern penetrating Mean Support $68.90.

Gold is also consolidating between Mean Resistance $1232 and Mean Support at $1217 which are firmly in place, albeit in a very different technical situation since the yellow metal is attempting to create a swing low which would validate a short-term uptrend following last week’s breakout. The move over short-term Mean Resistance $1232 would most likely lead to a retest of the $1248 Gold Rally, which includes a probable step to the following Key Resistance level at $1258.

October 18, 2018: WTI crude oil closed down on Wednesday forming important Mean Resistance $72.20, while prices closed near the upcoming first Mean Support $68.90. The bulls continue to have the overall near-term technical edge, although the latest crude price action indicates a short-term market top is at its position as a result of major Oil Rally $76.20 completion.

The second Mean Support is shown at $67.50; the third and vital Mean Support rests at $66 near Oil Dip $65.70 significant crude oil destination, while VERY MAJOR Key Support lays at $64.30.

Sugar closed at $1281 on Wednesday busting though Key Resistance $1268. Prices are closing nearer the Sugar Rally $1327 each trading day. Profit taking may pull down the soft commodity to Mean Support $1236 following striking a four-month high $1302 today. The bulls hold the over-all near-term technical edge, since the prices are in a steep uptrend, as awaiting Sugar Rally $1327 will be struck any day.

Gold closed down modestly on Wednesday. Prices closed tight in mid-range of Mean Resistance $1227/$1232 and Mean Support at $1217 which are firmly in place. However, the bulls are enjoying the overall near-term technical edge the very first time in many months.

One of the handful of assets to do well over the last seven days was Gold, which appears to have cracked the downtrend it had been in ever since April. BTW, Gold does not always trade inversely to the equity market, however, if the latest pattern keeps it could be an excellent diversifier.

October 13, 2018: Gold experienced one of its most vibrant days on Thursday as it opened under $1200 and closed whopping $30 higher, closing above critical Key Resistance $1214 price. A closure warrants a next Gold Rally of $1248, along with major Key Resistance $1258. On Friday Gold prices have retreated somewhat, giving back a $7.70 a part of Thursday’s results.

The WTI crude oil finished sharply lower on Oct 10, 11 sessions as it consolidates much of the declines off Oct high and completion of Oil Rally $76.20. The lower range close establishes the stage for transforming from bullish to semi-neutral signaling that sideways to somewhat lower prices are likely to occur in near term. The rebound probability exists to Mean Resistance which has developed at $74.60; along with Key Resistance, $76.20 is well established since Oct 3, while first Mean Support is at $70.10.

The Sugar finished higher for the second consecutive day with the completion of Sugar Rally $0.1232 in play since flagged by Trade selector Signal on Oct 1, as the commodity consolidates much higher range journey.

The stage for transforming from bullish by completing the move is signaling down prices are likely to occur in near term, with first Mean Support resting at $0.1194, while very significant the Mean Support lies at $0.1116. On the upside, there is major Key Resistance $0.1268.

October 11, 2018: The nastiest isn't yet to arrive: Within the last year, TSS has persistently forecasted the negative effects of Gold to $1200 range, accommodating more or less modest swings. And having Gold trending down this week, falling to $1185 on Monday session, it's hanging around where we had foresee the base range. (See all Technical Analysis and Outlook daily charts analysis below.)

And also, for the past two years, there was projected price of Gold that had to crack the $1400 per ounce level, which by the way has not pierced, to be able to thrust it look out onto the $2000 price range.

Given that Yellow metal prices are at the base levels of our prediction, we've acknowledged geopolitical as well as socioeconomic variables which will not only drive prices higher and also drive them towards our essential $1400 per ounce breakout position.

And this includes are increasing crude oil prices powered by worries of military and also economic warfare escalation in the region of the Middle East given that the U.S. readies a whole new round of debilitating crude oil embargoes towards Iran which will take effect on November 5th this year.

With WTI crude oil prices which have risen towards a four-year high at approximately $77 per barrel in expectancy of the embargo, should probability of military conflict increase in Iran, Syria, Yemen, and also other unstable Middle East places, we foresee an crude oil surge to $100-plus a barrel will likely result in a sharp surge in the best safe-haven asset, such as Gold and Silver.

Furthermore, with crude oil prices increasing, which is US Dollar primarily based, while currencies, notably EM's (Emerging Market) currently have decreased dramatically versus the Dollar, the higher crude oil prices climb, and the lower their particular currencies go down, the higher the downward strain on their economic systems.

Under these types of circumstances, Gold’s condition as a safe-haven asset will be significantly boosted.

October 9, 2018: A lot more than 1% loss in Gold was the most significant shift among top commodities yesterday, as alongside the US Dollar’s rally, the Yellow metal dived below the $1200  level once again, marking the September low near $1180 into play action still.

Gold hit very sturdy Mean Support $1183, but it failed to break it, and a move below this price level would warn of a test of the Key Support $1174.

WTI crude oil likewise lost ground yesterday in the middle of the ongoing sell-off, however, the crude oil futures contract continues to stay below $75 per barrel price level as well as the July low, jeopardizing an unsuccessful break-out reversal to Key Resistance $76.20.

Crude oil performed fairly well in the face of the sell-off on Monday, and it created relatively week Mean Support $74.20 for now, even so, the long-term trend continues to be clearly bullish. But be aware of Key Support looming at $72, while stage 2 and 3 could be reversible.

October 7, 2018: Commercials players accelerated their net-long standing in the Gold market to net long for the 5th week in the row. What is going on? Below you will find the chart showing commercials as well as bullion banks net-long Gold position. 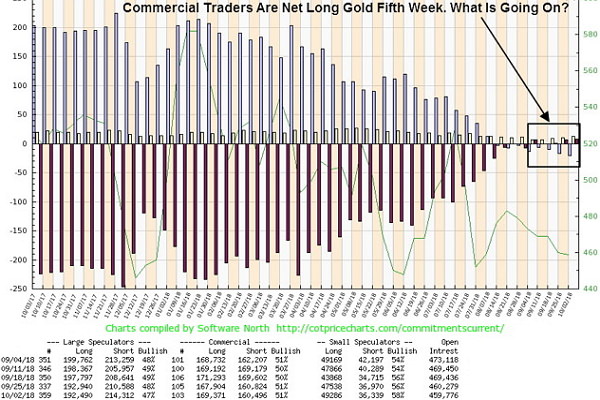 We now have noticed large-scale capitulation within the Gold and precious Silver markets, both in the metals as well as the underlying stocks of the high-quality companies which mine and also search for the precious metals. Bullion banks and commercial hedgers increased their net-long position in the Gold market to the most significant levels during seventeen years!. Sooner or later, these big players will let loose a historical short squeeze as never seen before.

Small-scale speculators also are net long. Therefore the large speculators (i.e., hedge funds) are short Gold futures contracts in record volumes even though the scale of the bar seems to be trivial. Gold sentiment is without a doubt a lot more bearish than it has been just before a severe blast higher which occurred in December 2015. But, record bearish market sentiment such as this by hedge funds is not going to be rewarded as usual - Stay tuned.

October 6, 2018: WTI Crude Oil has been flexing its muscle mass from the time it violated Key Resistance of $76.35 on October 1. This empowered the commodity to complete the outer Oil Rally $76.20, while the price action flagged the beginning of the commodity’s long-term uptrend.

Nonetheless, six days into the uptrend and the market is starting to sputter. Having Key Resistance $76.20 solidly confirming the end of a short-term bull run. It appears that WTI crude oil is due for a significant correction. The pullback might be Ket Support $72.00. In order to keep the bull run alive, the commodity will retest the Key Resistance $76.20 before plunging.

October 3, 2018: During an early trading session yesterday, the price of Yellow metal spiked $19, and also Silver surged 40 cents mainly because record speculative shorts positions holders were now being screened.  In the event, a short squeeze unravels, the Gold price surge ought to be quite extraordinary.

In the meantime, the crude oil market seems to be ready for something huge. One can sense it. What better product than crude oil to deliver an epic parabolic price level surge and then crash and burn?

Technical analysis show, the price action has completed long-term Oil Rally $75.65 as projected on September 12 chart analysis, ramming thru weak Key Resistance $74.35. Currently, the commodity is in the process confirming significant Key Resistance priced at $75.45 which will validate the end of the rally and signified a pullback.

Any movement above newly created Key Resistance $75.45 as well as completed Oil Rally $75.65 could head towards expended Oil Rally $77.20 and $81.50 respectively. On the downside, the draw-down target to Mean Support $77.00 is likely as a first significant target.

October 1, 2018:  Sugar 0.26% currently is stuck in a multi-year downtrend. Nevertheless, the decline to the long-term outer Sugar Dip $0.08955 area produces the potential for short to medium term bullish action. Following this bounce, we expect to see the Sugar 0.26% market to continue the downtrend right up until extends to its historic new support.

Curious about online trading? Want to make more money, be highly successful and have positive experiences in the niche? Welcome to TradingSig.com, a website that will...
Your Wealth Matters - Watch Now