The market(s) first full week of trading has been much more volatile than usual as geopolitical anxieties ebbed and flowed, set off fears of an immediate increase of the friction between the United States and Iran.

At the same time, crude oil was constrained by bearish inventory numbers and uncertainty that the Middle East situation would interrupt its production.

The Gold and crude oil market spiked before plunging after both countries stepped back from their military engagement. Brent oil traded inside a ten percent range before settling at five percent lower to mark its first weekly decline in a month and a half.

West Texas Intermediate (WTI) ended even more depressed after a bearish United States inventory data, which saw equities rise in both crude oil and its products. 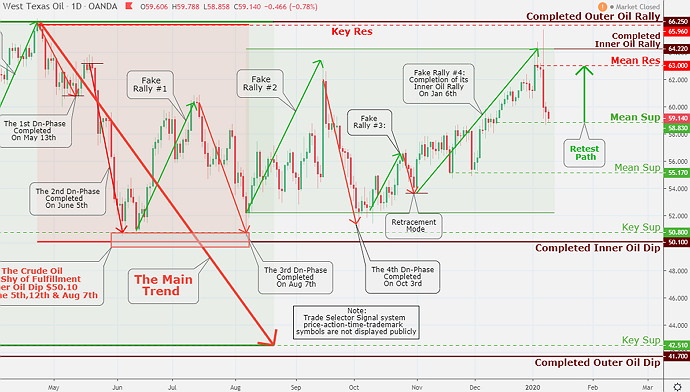 The safe-haven metal - Gold, spiked above $1600 level for the first time in seven years only to be spanked and send back to an unchanged level for the week.

Viewing this from a technical perspective, the movement provided a signal on the slower weekly chart as a key reversal pattern. However, Gold needs a lot more than geopolitical uncertainties to maintain higher prices in 2020.

The market(s) large-cap indices caught a new record high this past week trading, as anxieties in the Middle East were averted awhile the technology sector stocks stretched its performance.

The Nasdaq Composite index surged 1.8% to scale past the broader S&P 500 index, which posted +0.9% and DJI Average posting +0.7%. The small-cap Russell 2000 index marked -0.2% for the week underperforming for the third consecutive week.

The mega capitalization stocks within the broader S&P 500 index:  information technology sector posted +2.2% as well as communication services sector with the print of +2.0% continued to produce influential activity.

Separately,  on Friday's session, the December unemployment numbers showed 145,000 jobs were added on to non-farm payrolls, which by the way, was less than the projected of 160,000 and less than the accounts for October and November of last year.

The weak jobs release was most likely a good cause for traders and investors to take some profits off the table and what many saw to be an overbought market condition, as equities ended the week on a lower mark.