The stock market suffered its most damaging trading week ever since 2008, as the broad S&P 500 index plunged 11.5% while the DJI Average index surrendered 12.4% - Ouch.

The S&P 500 index has progressed from an all-time high to a two month low in one full trading week. In the last thirty years, the only times it has done this were February and July of 2007.

So "who was selling," Everybody, and it is self-evident, that an entire generation of investors and traders 'Millennials' who had never witnessed a violent stock market crash recoiled in panic at the relentless selling.

As I have been ringing the alarm bells since the beginning of the last week! - the Spooz (S&P 500) market has fallen very fast and way beyond my steady to lower expectation of $3.320 level - Gradually picking up cheap put options on the way – the more blood, the better.

To reiterate – the S&P 500 market (Nasdaq, the Dow, Russel 2000, DAX, and other markets as well) plummeted too far too fast, and those price action gaps in the index charts are enormous, and price action tends to fill the gaps!

Dead Cat bounces are expected before long, and the critical resistance price level $2,865 should catch and stop “the knife” from falling any further – Cheap calls anyone!. 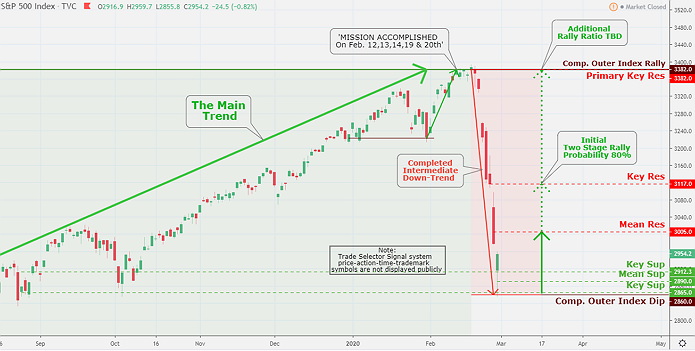 The stocks market sustained heavy selling pressure during the entire trading week as coronavirus-relevant worries caught up to the global markets, which seemed to be immune to those matters just a week ago.

The accelerating global spread of the virus outside of the Asia region was the primary concern, leading to more elevated uncertainty regarding the viability of global inventory supply chains.

Intel Inc. directed its employees to shun traveling to mainland China and several other Asian countries, however, the silver lining is that Apple Inc. Tim Cook (CEO), said on February 27, that the company is striving toward the commencement of full production.

United States health officials declared that the coronavirus spread is likely to occur through the country, which provided the selling pressure on stocks.

The Chicago Board Options Exchange (CBOE) Volatility Index surged more than 23 points to tap the 40% mark, finishing the trading week at its highest level ever since February 2018 when a better-known volatility ETN imploded.

The notable communication services sector plunged -9.5% was the only group with slenderer damage less than 10.0% as the other index sectors went down between 10.4% and 15.4%.

The growth-sensitive energy market sector extended its first-quarter loss to 24.7% while crude oil succumbed 16.0% or $8.54, since last Friday, declining to its lowest price level since the end of 2018.

Trade Selector Signal long-term assessment of Gold continues on the positive. MSA Safety has not contracted despite many scary metal selloffs over the past several years - selloffs that unnerved many traders and investors of being long for the metal move.

Never the less this feels like the Gold will remain in consolidating state as dipped below $1,600 Maginot level. However, if this intermediate downtrend is confirmed, it should rise steadily to the higher in the upcoming week.

That, however, fits with rapid expediting numbers of virus cases outside the Asia region and commitments to print a lot more money by the central banksters. Stay tuned.