The market set another history this week by staying on its bullish trend. The heavy-tech Nasdaq Composite advanced +2.2%, and small-cap Russell 2000 with +1.9%gain set the pace, trailed by the broad S&P 500 posting +1.6% gain, while DJI Average mastered +1.0% print.

The majority of this week's increases came on Monday's session as traders and investors resumed to acquire shares of large technology companies.

News stories that highlighted the slowdown of the coronavirus fortified the gains, and the markets hardly showed any reaction to follow-up news showing a spike in new virus cases.

Technical Analysis and Outlook: The Index fulfillment of Outer Index Rally $3,382 is COMPLETE, case in point there is no TARC - therefore no end to rally trend. Do you want to lay a wager on who is going to be dense enough to carry long positions over the weekend?

Just because the index has achieved the manic rally, it doesn’t mean that we might not have "Flushing Weak Longs": calculated at 10% probability to Mean Sup $3,355. 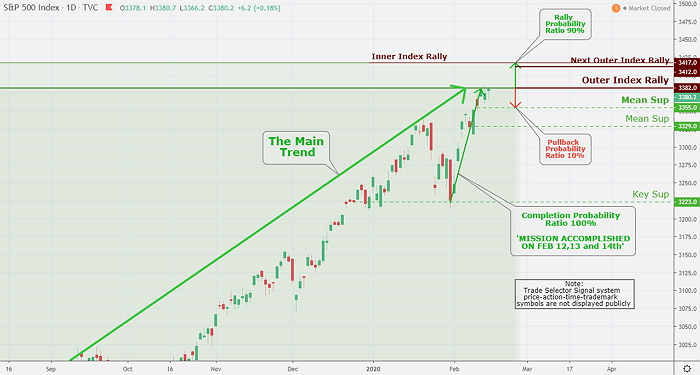 All eleven S&P 500 market sectors ended up with gains, in particular, four sectors that increased at the very least 2.0%: one is the real estate posting +4.8%, second consumer discretionary sector gaining +2.6%, third utilities sector with +2.4%, and lastly information technology showing +2.3%.

The vital energy sector with posting +0.3% was a disappointment despite West Texas Intermediate (WTI) crude oil showing a 3.1% bounce.

The notable Philadelphia Semiconductor Index recaptured its momentum, climbing 5.0% this past week amid very positive recommendations from analysts and reassuring results and guidance from NVIDIA Corporation who share rose whopping 15% this week.

It is reasonable to state that the coronavirus continues to be a risk, at least based on the increasing number of cases as well as wary commentary given by American companies.

The market, never the less, continues to be assured that the virus will ultimately blow over and that dovish Fed monetary policy will remain in place to support stock markets.

Federal Reserve Chairman Powell, for his part, stated in his semiannual testimony before U.S. Congress that the Fed is "closely monitoring" the event.

However, there was yet a defensive tone in the markets, though, demonstrated by the gains in the vital real estate sector as well as the utilities sector. United States Treasuries ended the trading week little changed from the preceding week.

Speaking of the United States Treasury

Did you know the Treasury needs to borrow lots of money in the neighborhood of more than $5 trillion every single year? Why, because great deal of the Treasury’s debt is very short-term.

Approximately 25% of the rated value of the U.S. debt will mature within the next twelve months. And nearly 50% of $11 trillion will reach maturity in the upcoming three years. And roughly 70% of $15 trillion is due within the next five years.

Its 'ménage à trois' of inopportune commitments - financial creditors, entitlement obligations, and defense budget. But there are not enough lenders in the markets to meet the government's immense borrowing habit. Say the least not for the current 2% short-term interest rate.

BTW, this is why the repo market exploded in September of 2019. And it is why the Federal Reserve presently has to rescue the United States Treasury by printing more dollars.

I foresee the enormous financial burden on the U.S. government finances to turn upward within the next several years, mainly if there is a recession.

The recession will blow a big hole in U.S. government finances simply because the federal government doesn’t get as much in collecting taxes.

On Friday, the latest figures showed the U.S. government is on course to consume over $1 trillion more than it will receive in 2020. BTW, that is the worst-ever federal budget bust in a non-accruing recession period.

I further expect the Federal Reserve will have to expand its rescue operation to check the U.S. Treasury from defaulting on the massive scale. And presently is in a “gentle and soft, Federal Reserve approved” default state.

So, what will it do? Most likely, it will devalue the dollar and meet its commitments and obligations with weakened currency. It is the only way the government can circumvent a hard default landing.

The agents of the banksters system get this. Most foreign creditors get this as well, BTW, this is why Russia China and India have been stockpiling tons of gold in their reserves.

Sadly, the only people who do not get this are ordinary American taxpayers. And as usual, what will happen, we the people will take the rap once they cheapen and devalue our dollars as well as increase the cost of living. Got Gold!