The broad S&P 500 index dropped -2.1%, DJI Average plunged -2.5%, and small-cap Russell 2000 index sank -2.9%: these three indices lost more than 2%, while the technology-heavy Nasdaq Composite index with -1.8% managed somewhat better. The Nasdaq Composite was the lonesome market to finish the month of January higher above 2.0%.

Separately, the Federal Reserve left the interest range for the fed funds interest rate fixed at 1.50% to 1.75% and extended Repo (repurchase) operations through April of this year - For now. The latter was conceivably totally unexpected information to appear out of the Fed policy meeting earlier this week.

I have frequently been writing about the Federal Reserve's cheap money that is feeding a mother of all times a speculation bubble, which will kick off another Wall Street collapse.

Indeed, Dow Jones's over 3,000-point surge since September of 2019, which had no connection with natural stock market value, but the outpouring of cheap money, by the Federal Reserve that has made obtainable for the large trading houses to speculate.

Reflecting on Trade Selector Signal market trend outlook, on 20th of January, Chairman of Guggenheim Partners’ Scott Minerd, an advisor to the New York Fed, wrote a comment in which he compared central banks’ stock markets manipulation to a Ponzi scheme and said, “Ultimately, investors will awaken to the rising tide of defaults and downgrades.”

The market for United States Treasuries settled the week with higher gains amidst the growth anxieties. The Two-year yield and the Ten-year yield plummeted 16 basis points respectively to 1.32% and 1.52%. The United States Dollar Index (DXY) declined by 0.5% to close 97.36. West Texas Intermediate (WTI) crude oil declined whopping $2.63 or 4.9% to close $51.59/bbl on Friday.

And there you have it, as foreseen in January 4 Gold chart analysis, the breakout and close above the Key Res $1,582 - the most apparent resistance, marks the steady journey once again to $1,600 level. 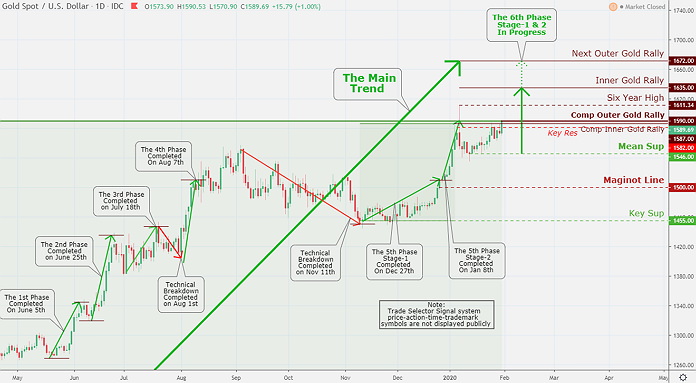