The market delivered another record week in which the United States and China struck a Phase One trade agreement that eased the tension circumventing the trade tariffs kicking-in on December 15.

The nine out of eleven S&P 500 sectors ended higher, with the leading information technology posting +2.0% gain bettering by a wide margin the semiconductor sector amid its strength. 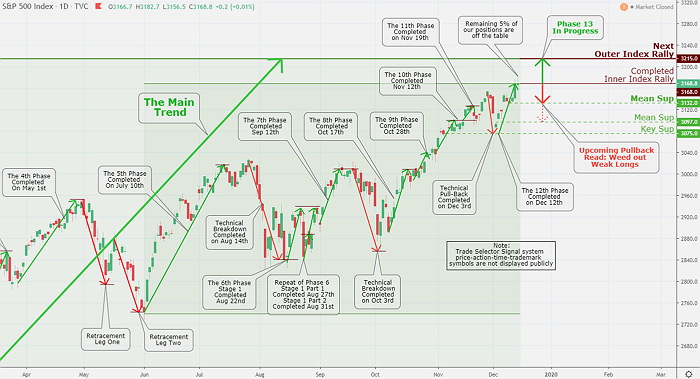 The trading week delivered another record.  We have taken off the table the remaining 5% of our positions after the index hit Trade Selector Signal Inner Index Rally $3,168.

Currently, the market is the development of Phase 13; however, likely weed out weak long (Pullback) is probable. The current setup needs to be confirmed by Trade Selector Signal BARC or TARC signal - The Short or Long entry positions.

The market outcome was mostly solidified way before the trade agreement announced on Friday's session, which by the way, was anticipated given the increases posted previously and further markets quiet response after the official announcement.

The United States Trade Representative (USTR) affirmed that the trade tariffs on $250 billion of Chinese goods (imports) will be unchanged at 25%, the tariff charge on $120 billion of additional Chinese imported goods will be lowered from 15% to 7.5%, while China will be committed to buy the other United States farm goods.

U.S. agricultural buying will reportedly be somewhere between $40 to 50 billion over the next two years. U.S. President Trump appended that Phase Two talks will begin shortly, which should concentrate on issues concerning Intellectual Property (IP) rights and forced technology transfers.

United States Treasuries had a week of another wild swing movement though eventually ended near their unchanged levels from last week. Both the Two-year yield and Ten-year yield dipped one basis point to 1.60% and 1.82%, each respectively.