The Housing Market Is Not Well

The housing market is not well, as earlier this month, one company singlehandedly proved it. Blackstone, the world's largest alternative investment firm, made headlines this month.

The firm said that investors have collectively demanded more than the 2% of net assets it’s prepared to pay back in a given month. To be clear, most investors almost certainly knew BREIT had limits on redemptions due to housing market crisis.

After all, private real estate funds serve wealthy individuals who are willing to give up some of their liquidity rights in hopes of achieving higher returns.

But nobody imagined this would happen so quickly and on such a large scale. In fact, BREIT was hit by a doubling in redemption requests for November.

In other words, investors have been rushing for the exits in droves. Worse – as redemption requests doubled – the fund’s subscriptions plummeted to less than $500 million from $880 million in September.

Given these circumstances, I’m not surprised a private equity fund is locking its investors in… It’s trying to prevent a bank run.

Blackstone’s housing market wobble is a big story, and it lays bare the unavoidable woes facing the housing market today. But it’s only one part of the story.

For one, publicly-traded REITs as a group were hit even before the Blackstone story broke. The $35 billion Vanguard Real Estate ETF (exchange-traded fund), for example, is down 26% year to date.

The numbers are scary. Last month, for instance, almost 41% of U.S. small businesses failed to pay rent. That’s more than one-third of businesses not being able to pay rent. Just let that sink in.

Roughly 42% of construction company owners were not able to pay their rent, while 37% of real estate agents couldn’t pay their rent. As many as 57% of beauty salons and barber shops could not pay rent too. That’s a striking 18% points increase over their 39% delinquency rate in October.

Out of all the states, New York fared the worst. Nearly half (49%) of all small business owners there could not afford to pay their rent on time and in full in November. And it’s not just the commercial property segment. Residential real estate has been cracking under pressure, too.

That's the largest decline since the Great Recession. Aside from the first quarter of 2020, investor activity cratered at the start of the pandemic.

Meanwhile, overall home purchases nationwide saw a 27% drop last quarter, according to the report. All this tells me that we’re now barreling toward a situation similar to the housing market crisis we saw in 2008.

It’s the Fed’s Fault: I know it’s almost a cliché at this point to blame the Fed. But all cliches begin with truth. Remember, the Fed initially ignored rising inflation, saying it would pass once the effects of the Covid shutdowns were fully out of the system.

It wasn’t banking on a war, an energy crisis, and ongoing lockdowns in China. Or inflation hitting 9.1%, the highest since the end of 1981. When it finally took action against inflation in March 2022, it was too late.

So, the Fed did what any rational, omnipotent organization would do. It went into overdrive. On July 27, the Fed raised rates by 0.75% for the first time this year. It was the biggest rate hike in almost three decades.

We’ve had three more consecutive 0.75% hikes since then, bringing the Fed rate to 3.75-4%. And hiking the cost of everything from credit card debt to corporate financing and, of course, mortgages. Just look at chart below how mortgage rates spiked this year. 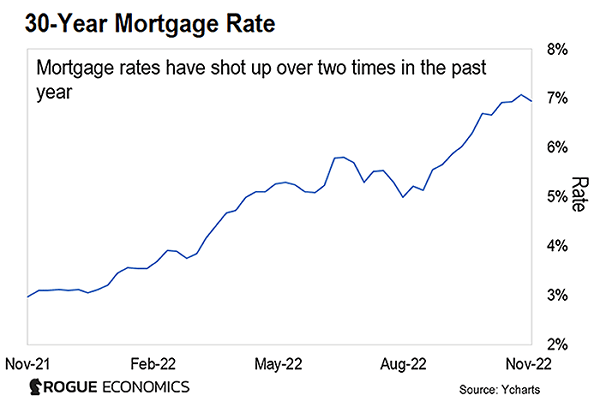 See the 7%-level peak in the top right corner. That’s the reason why home sales crashed by 27% in November compared to 2021.

In short, the housing market is getting hit by a combination of higher rates, higher rents, and lower property valuations. Some economists are already warning that we could be on the verge of a housing meltdown.

And as Bloomberg put it: The wave of [bankruptcies], that’s coming could be the worst since the housing market bubble burst about 15 years ago.

This time, let us be prepared.