Frankfurt is a city with the unique distinction of playing host to one of the first stock exchanges in the world. Deutsche Borse owns and operates the Frankfurt Stock Exchange (FSE), which is the 3rd largest stock trading platform in the world and the second biggest with regards to market capitalization. 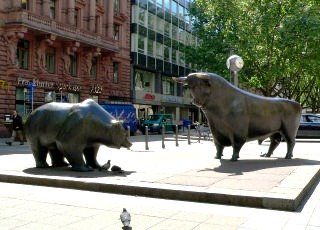 On the FSE there are currently about 6825 companies quoted, and the annual turnover is about 5.2 trillion Euros. Most of the trading on the Frankfurt Stock Exchange happens through an entirely electronic trading system referred to as Xetra. Xetra allows for up to 15 different countries to trade on one platform.

Electronic trading made possible through Xetra makes it possible for the country to actually trade on the exchange without being physically present on the trading floor.

In fact, about 47% of companies that trade on the FSE are actually located in other countries. Companies that wish to enter the FSE can choose from 3 different categories available: Entry Standard, General, and Prime.

Entry Standard as the name might suggest the easiest way considering that the EU rules regulate the General and Prime. Examples of companies that are listed on the FSE include Hugo Boss Ag., Daimler Chrysler, Porsche, Opel, and Nokia.

Frankfurt Stock Exchange traces its roots to the period of medieval fairs. In 1150 during the Assumption holiday was when the Frankfurt autumn fair was mentioned in writing for the first time. It is believed that the autumn fair had its origin as a harvest fair back in the 11th Century.

The city became an important center for monetary and commercial transactions since 1330 when Emperor Ludwig the Bavarian expanded the privilege to also include a spring fair. The trading activity during the fair led to the manufacture of goods gradually developing to merchandise production for a nationwide and open market.

By the start of the 16th Century, the city had become quite prosperous thanks to its popular fairs that Luther actually termed is as the German Empire's 'silver and gold hole.' The immigration of French and Dutch merchants who were facing persecution due to their Protestant belief led to the establishment of the banking and wholesale commerce sector in the city in the 16th Century. Merchants from all of Europe came to engage in trade in Frankfurt.

World War I hit the FSE particularly hard since it was internationally oriented. Out of fear of instrumentalization by warring states German investors sold foreign bonds and shares. Government bonds was where the freed up capital was invested. By the time the war was over, all the foreign securities completely disappeared from the German exchange lists thus causing the city to lose its standing as an international stock exchange.

In 1932 with the economy stabilizing and the Nazi takeover in 1933, the overall economic policy was integrated into the war and general government policy. States were stripped of the power to supervise the stock exchange, and it became the domain of the central government with the stock exchanges being reduced to just 9 from 21. In 1935, the Mannheim stock exchange was incorporated by the FSE. The name of this merged exchange was Rhine-Main Stock Exchange. Even though the FSE continued functioning as a 'domestic stock exchange,' in reality it had no major service.

The FSE remained closed for six months following the collapse of the Nazi regime back in 1945. It was in September 1945 that it was reopened under the US military government's protectorate as one of the first German stock exchanges.

The FSE recovered its old significance gradually but only after the increasing consolidation of the German economy and the currency reform of 1948. The FSE officially started trading once again in 1949.

Four currency exchanges were opened in 1953 for the Swiss franc, Canadian dollar, US dollar, and currencies of the European Payments Union. The purchase of foreign securities as once more allowed in Germany starting 1956. The city was, therefore, able to resume its leading position in Germany and its tradition of international business.

For Germany's post-war reconstruction the stock exchanges played a key role as capital intermediaries. Through the activity of the stock exchanges, they were involved decisively in the subsequent economic growth witnessed in the 1950s and 1960s with the achievement of the Federal Republic of Germany becoming a dominant global economic force.

The year 1957 was when the Main Trading Hall of the FSE building at today's Börsenplatz previously known as Rahmhof in the center of Frankfurt had opened once again after rebuilding.