Dogecoin Does Not Compete With Bitcoin 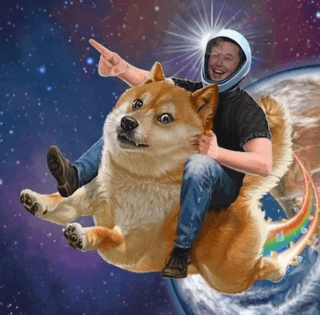 Elon Musk’s Dogecoin tweets have given the coin a nice run, sending its price from fractions of a penny — where it traded for roughly eight years — to 40 cents on April 20th before falling back. It was enough to yank Bitcoin skeptic Peter Schiff from watching his gold portfolio do nothing — also for roughly eight years — to crow that “Dogecoin is eating Bitcoin” and begging Dogecoiners to put laser beams on their nose.

So what’s the story, is Dogecoin set to overtake Bitcoin and then USD to become the world’s reserve currency?

Very wow, but no. The short answer is because Dogecoin and Bitcoin serve fundamentally different purposes. At best, Dogecoin is one of many medium of exchange (MOE) coins, while Bitcoin stands alone as a stable and secure store of value (SOV) where people park their life savings. In other words, Dogecoin doesn’t compete with Bitcoin any more than your dinner plates compete with your refrigerator, pantry, or freezer.

So, with that, what is Dogecoin? Like bitcoin, it’s a POW (“proof of work”) coin where transaction processors vote on the game rules, including how new coins are produced. There are 129 billion dogecoins in existence, with 5 billion new coins issued per year, for 3.9% annual supply inflation. The 5 billion is constant, meaning Dogecoin’s inflation rate gets lower and lower as new coins add to a more extensive base — in 4 years, it falls to 3.3%.

Next up, speed and fees. While Bitcoin creates a new block of transaction records every 10 minutes, Dogecoin creates one every 1 minute. However, given Dogecoin’s more miniature ecosystem (market capitalization, miners), you’d want to wait for multiple block confirmations to be sure. The crypto exchange Kraken, for example, requires 40 Dogecoin blocks — 40 minutes — before considering a deposit valid, the same time they need for Bitcoin. So it’s a functional tie on speed.

Next, fees. Dogecoin has been very cheap until recently; a year ago, it cost a fifth of a penny to send a transaction. It does have slightly more capacity than Bitcoin, but the main reason was almost nobody was using Dogecoin, so it was like buying space on an empty cargo ship. Alas, now that Elon’s tweets have lifted Dogecoin from the muck, those fees are rising today at $1.09. More on this later, since it goes to Dogecoin’s long-term prospects as a MOE.

So far, a Peter Schiff might say, “sure, it all sounds like a Bitcoin clone.” And that brings us to the vital question: how people use it. We can read this directly off valuation as a ratio of usage. This tells us, fundamentally, if people are using Dogecoin to store savings as they do in Bitcoin or if they’re using Dogecoin for transactions.

On that count, Dogecoin today is going for 35c, making those 129 billion coins worth $45 billion. At the same time, Bitcoin’s 18.6 million coins are currently worth $1 trillion. Meanwhile, CoinMarketCap says 66 billion dogecoins are now traded daily, worth about $23 billion, and 1 million bitcoins are traded daily, worth about $55 billion. Divide the two, and you get a market value of Bitcoin at 20x daily volume, but just 2x for Dogecoin. This is telling us, loud and clear, that Dogecoin is not a store of value. It may not even be a perfect medium of exchange since pure MOE coins like Monero or Dash trade around 4x daily volume.

Why does the market think Dogecoin’s a lousy place to park your life savings? We can speculate that given it was essentially abandoned for eight years and is populated by charming but low-commitment users, it cannot begin to compete with Bitcoin’s social layer, network effects, brand trust and loyalty, holder dedication and stability, and even Bitcoin’s enormous energy use that increases security by increasing the cost of an attack. This last point is essential considering that sovereign attack has been the final battle that has killed every previous private money in history.

So, if Dogecoin isn’t seen as an SOV for solid reasons, it means it doesn’t even compete with Bitcoin. Any more than your dinner plates compete with your fridge. Both are inputs to eating food, yes, but they involve different stages with negligible overlap. For example, if you buy a more admirable set of plates, you don’t empty the fridge, and if you buy a bigger fridge or move it where you can reach it easier, you don’t feel the need to buy smaller plates. And, germane to market capitalization, the vast majority of the food you own is in your fridge or even freezer (“cold storage”), not sitting on a plate at any given moment. Just as the vast majority of people’s life savings are in a bank, house, or stocks, not sitting in their pants pocket to be whipped out at 7/11.

It’ll have to be a separate article, but the broader lesson here — beyond dashing Peter Schiff’s dreams of a Dogecoin Standard — is that Bitcoin skeptics are way off when they complain about Bitcoin fees or 10-minute blocks. Bitcoin doesn’t pretend to be a medium of exchange, and it hasn’t for years. Users told it to be a store of value, and it turns out it’s a damn fine one. Nothing else comes close, and certainly not Dogecoin.

So if Dogecoin doesn’t compete with Bitcoin, who does it compete with? Simple: MOE coins and exchanges. Considering these solutions work in seconds and have fees even lower than Dogecoin’s pre-Elon days, it’s unclear why one would bother. In which case, Dogecoin would be not even a MOE, but that streetwalker among cryptocurrencies: a speculative coin. One whose life’s purpose is, in practice, speculating on Elon Musk joke tweets and then, like a cicada, going dormant for eight years.

Can Dogecoin still go up? Sure, speculative assets are Rule 34 of the financial world — they can do anything. But the fundamentals aren’t there to sustain durable demand for Dogecoin, certainly not as a store of value and, I think, not even as a medium of exchange.