Where and how Congress Members trade and invest their money

The information about Congress Members and how they invest and trade their monies is shocking, to put mildly. The wealthiest have a net worth of 200 million dollars! And another has completed more than 1,200 trades in the past twelve months. This is nearly five trades per day. The value of those transactions (buys and sells) was more than $85 million.

The issue with many of the Congress Members is that they become wealthy once they are elected to office. The financial numbers are staggering, especially when considering working full-time tasks that we elected them to. I'm not clear how many of them find the time to do it!

It's also difficult to believe that their portfolios don't exploit their decisions at the Capitol. Each week, they're targeted by representatives of businesses across all industries. For example, Goldman Sachs spent lots of their time away from Wall Street assignments; guess where: in Washington!

Nonetheless, we're more interested in where all that money is moving. It is because the investing practices of the Congressional members are a sign of the ongoing contradiction between the market and the real economy.

This distortion directly results from the record amount of money that the Federal Reserve - America's central bank has pumped into the banking system over the last decade and a half. Congress Members investing patterns are another aspect of the source of that money and it outflows.

Knowing where all the capital is moving to from central banks and Congress - can serve as a compass to profit for us investors. Let's look at exactly where lawmakers are investing their money and how this information can help to increase your wealth. Below is a chart that shows the total value of the stock the Congress Members purchased in every market sector in 2021. 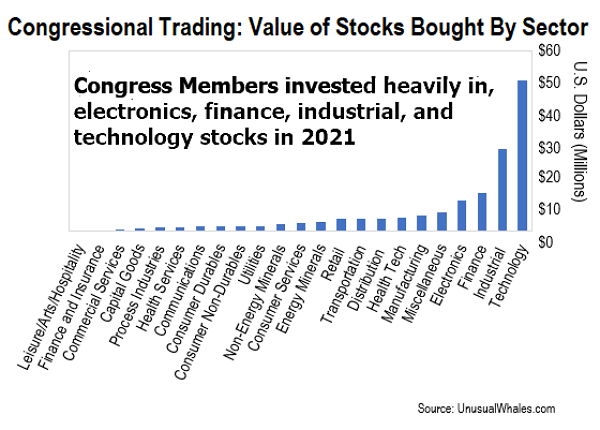 In total, the members of Congress have bought $149 million worth of stocks over this year. The feature to note is that Congress Members prefer to invest in technology. In actuality, fifty D.C. politicians bought $49.8 million worth of tech companies in 2021, putting in more than 1,000 transactions.

However, it is interesting to note that members of both the House Representatives and Senate members Senate have two distinct investment strategies. We'll start with the House of Representatives' favorite technology stocks. The members of the House purchased $66.2 million worth of the top 10 most preferred stock in the year 2021. This chart lists the most popular stocks they put their money in. 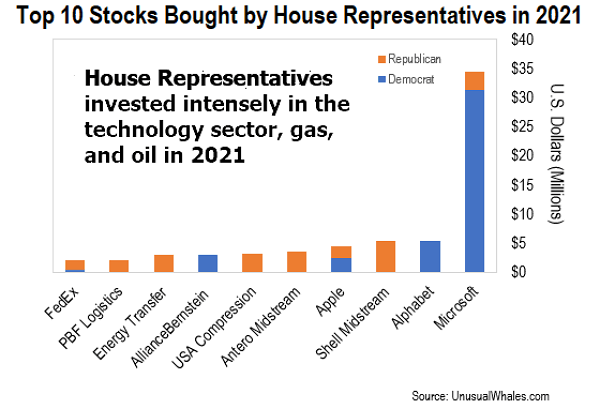 Overall, their most popular stock sector was technology. Microsoft is the biggest winner. There are two other top names from the technology industry in the top five, including Apple and Alphabet (Google's parent firm). Gas and oil stocks were also popular among lawmakers from the House.

Democrats did most of the buying $43.5 million total, as shown in the chart above. Their top choice was Microsoft; they put in $31.3 million in the stock in 2021 compared to $5.3 million invested in Google. House Republicans purchased $23.7 million from the top 10 stock; however, they predominantly focused on gas and oil stocks.

The U.S. Senate favors infrastructure investments deals, and in the Senate, the situation is quite a different scenario, as we can see in this chart. 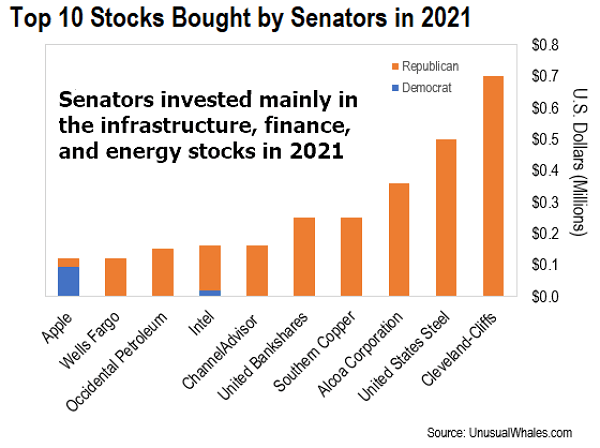 In the Senate, members have bought $2.8 million of equities in 2021. As you can see, the most popular ten stocks they purchased were mainly in the infrastructure industry sector, which was then followed by the finance and energy sectors. The steel producers of United States Steel, followed by Cleveland-Cliffs, Southern Copper, and aluminum producers Alcoa Corporation make the four top stocks purchased by Senate members in 2021.

Republican senators were behind most of the purchases of these top 10 companies in the last year. Therefore, the most important patterns that stand out in the three shown charts above are:

Democrats receive a significant amount of cash from the technology sector via campaign contributions. In reality, around 98% of the political donations from internet companies in the presidential election of 2020 were given to Democrats. It is not surprising that their financial interests are closely aligned with the technology sector.

Congress Members invested vigorously in the stock market, and what does this mean for you?

Therefore, the most popular stocks purchased by Republican senators were from businesses that we believe will profit from $1 trillion of infrastructure projects. In general, the infrastructure stocks enjoyed a fantastic year in 2021 also.

The investment options coincide with my two primary segments and investment themes - Infrastructure and Transformative Technology. This means that Congress Members invest personal funds in areas we believe are ripe for growth.

Any additional money that flows into these industries, regardless of source, can contribute to their performance to a high degree. Therefore, it is essential to know how your lawmakers invest their funds. This provides a necessary insight into how they're investing public money. This can give us a road map on how to earn significant profits.