The blockchain industry is experiencing some changes right now 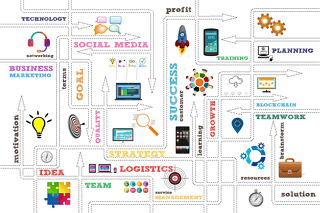 The government can't seem to get out of its way. The U.S. Securities and Exchange Commission threatened to sue Coinbase, a publicly-traded digital asset exchange, if it introduced a new product called "Lend" days ago.

Lend is easy. A cryptocurrency savings account would allow consumers to earn 4% annually on their savings by opening a USDC (a U.S. Dollar stablecoin) and saving it. Outstanding! This product using the blockchain industry would have been an excellent choice for savers and conservative investors. It is readily available on a fully compliant exchange.

Gary Gensler, Chairman of the SEC, suggested that this offering would be in violation of securities regulations. He said that Coinbase paying interest for a U.S. Dollar stablecoin is security. Insanity!

This is what you should think about: When we deposit dollars at a bank in savings and earn interest, are those considered securities? Hell no.

Worse, what is the average interest rate we receive for saving at a bank? The Federal Deposit Insurance Corporation (FDIC), an entity created by the U.S. Congress, states that the rate is 0.06%. To put it in perspective, the inflation rate as a result of current monetary policy (i.e., money printing) is currently at 5.25%

Every day, anyone who leaves U.S. Dollars in savings accounts is losing money. These dollars are losing value, and interest payments are not keeping up with inflation.

This is why this type of situation is known as the "stealth tax." It is a confiscation of wealth that affects everyone, and it is a tax that has disproportionately negative impacts on savers and investors.

These policies are also very beneficial to the extremely wealthy. They borrow against their assets at meager interest rates and invest in high-return assets available only to qualified buyers - an individual or family-owned company with $5 million in investments.

Yet, the SEC refuses to allow Coinbase (blockchain industry) to launch a U.S. Dollar savings account that pays 4%. Although it is not above the actual inflation rate, it is still better than 0.06%.

Ironically, the Howey Test is used to determine whether something is a security. It is based on the assumption if there is “an expectation of profit” and there is an “investment of money, so that is a common enterprise.”

This is why the SEC is so absurd about its position on the Coinbase Lend Program. A U.S. Dollar stablecoin is precisely what it sounds like. It is a digital representation of the U.S. Dollar. Its value is intended to be one-for-one identical to a single U.S. Dollar.

Blockchain industry and a stablecoin

A blockchain industry stablecoin is not a business and does not promise profit. It is money and a medium for exchange. No more, no less.

It is even more fascinating to see why the SEC targets the most regulated and compliant digital asset exchanges on the planet. Coinbase was founded on the principle of not breaking any rules. It engaged with regulators early and often and adhered to all applicable regulations.

This has been its competitive advantage. It made its operations and the financial status public to ensure transparency for regulators and investors.

It is even more surprising that lending in cryptocurrency has been a common practice. For cryptocurrencies in high demand, exchanges and projects pay an annual interest rate.

For those willing to lend cryptocurrency using the blockchain industry to provide liquidity, rates can be high. Rates as high as double-digits. This is particularly true for those who are eager to lock their currencies for a time.

These outstanding programs pay investors interest rates far higher than inflation. This gives ordinary people the opportunity to increase their savings. This is a gangster move. To send a message, the SEC and central government are attacking the industry leader.

They could have pursued many other projects, some that may be violating the rules, but they wanted something that would put the entire blockchain industry on notice. Something illogical. Treasury Secretary Janet Yellen coordinated efforts to create new regulations for stablecoins.

In a recent interview, Jerome Powell, the Chairman of Federal Reserve, stated that while existing laws provide a framework to a digital U.S. Dollar, he prefers to create new legislation. This is all about authoritarian control. It won't work.

Coinbase will present an industry regulatory framework this month. The government isn't doing its job well right now. So the industry is taking charge and working hard to get it done. Coinbase will win. Ripple will win. The blockchain industry will also win.

The last 18 months have shown us that we are fed up with censorship, banning free speech, suppressing scientific research, and loss of freedoms, for which so many of our forefathers have worked so hard over the centuries.

It is unclear whether all this will be possible in the United States so that everyone can benefit or if it will take place offshore.