AMEX (American Stock Exchange) is the third largest stock exchange in terms of trading volume. NYSE Euronext acquired it in 2008, and in 2009 it became the NYSE AMEX Equities. New York City is where AMEX is located, and it handles around 10 percent of all the securities traded in the U.S. 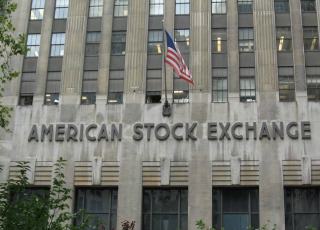 The American Stock Exchange is primarily referred to by the slang term 'Little Board'. This nickname comes from the term "big board" used for describing the NYSE.

The consolidated stock exchange in the early 1900s was located across the street from the NYSE, and it was then that it acquired the 'little' title. It was also not so fondly referred to as "The Morgue." Today, the term "little board" refers to the AMEX.

The AMEX name was initially changed to NYSE Alternext US and subsequently referred to as NYSE AMEX Equities. AMEX was originally a strong competitor to the New York Stock Exchange, but today NASDAQ has filled this role. Almost all the trading on AMEX is today on derivatives, exchange traded funds, and small-cap stocks.

AMEX can trace its roots back to the late 18th Century. Back then, the investment trading market was still in its infancy and brokers used to gather on the street and at coffeehouses to exchange securities. Numerous freshly created businesses would focus on industries such as textiles, oil, and railroads usually traded first through curbstone brokers. Curbside trading in the 19th Century was mostly disorganized. The New York Curb Market Agency was created in 1908 to provide a framework of regulations and rules surrounding trading practices.

The New York Curb Exchange changed its name officially in 1953 to the American Stock Exchange. It started being referred to as an exchange where development and trading of new products happened. AMEX launched its options market in 1975 and started delivering educational materials discussing the rewards and risks this new product presented. AMEX introduced the first ever Exchange Traded Fund (ETF) in 1993, the Standard and Poor's Depository Receipts (SPDR) that focused on investing in the Standard and Poor's (S&P) 500 Index. AMEX joined the NYSE family of exchanges in 2008 and boosted its position in the trading of ETFs, option, closed-end funds, and equities.

Long ago, the term 'stock market' was synonymous with 'stock exchange,' which is a place where people would gather to sell and buy securities. In this age of electronic communication networks and computerized trading like those run by BATS and NASDAQ, this is no longer true. The human element has actually reduced further with the introduction of automated trading, high-frequency or high-speed trading platforms.

Physical exchanges of paper might be rare and actual trading floors are continually dwindling, but the concept of a stock market is still intact. Whether it is figurative or literal, individuals, companies, and societies all love the idea of an open, public forum where money can be raised, invested, and made.